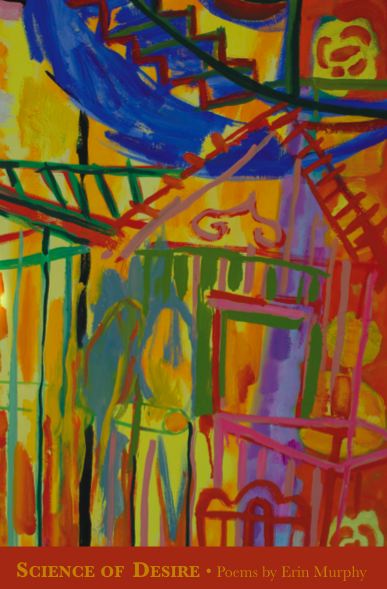 Erin Murphy’s Science of Desire investigates the ache of longing, the burn to feel and live, with a precision worthy of any laboratory. But these sensual poems’ laboratory is the entire world, and the trials their speakers undergo are anything but blind.

Erin Murphy’s poems have appeared in The Georgia Review, Field, Nimrod, The Paterson Literary Review, Literal Latte, Kalliope, and elsewhere. She received her M.F.A. in Poetry from the University of Massachusetts, Amherst, where she was a Poetry Fellow. Her awards include the 2003 National Writers Union Poetry Award judged by Donald Hall; a Pushcart Prize nomination; and a Maryland State Arts Council Individual Artist Award. She lives in Pennsylvania and teaches at Penn State-Altoona.

“It’s the mixture of verbal sensuousness and quick intelligence that appeals most strongly to me in these vivid poems by Erin Murphy. There’s something intrepid, honest, insistent in her ability to negotiate at speed between facts and feelings.  Anchored often in family, her imagination can float out on currents of edgy, idiosyncratic, individual revelation. Alert to the language itself, she is always physically mindful of its meanings, its play of possibilities. Behind the wry humor, there is a decent, sympathetic love for the ordinary stuff of the world, for how ‘apples [are] polished like memories.’ She is like that man ‘working/ his garden like the day itself depends/ on this season’s tulips: blood-red, short-lived.’ A striking first book, Science of Desire is in its own way a book of knowledge.”—Eamon Grennan

“Erin Murphy’s clear and plainspoken poems appear to keep as close to the facts of experience as possible. But this is a kind of wonderful illusion, for Murphy uses memory to transform the world that was into a world that is. This process is not quite a science but it certainly restores desire and wonder to our lives.”—Michael Collier

“As she slips into and out of other lives as well as her own, Erin Murphy combines the cool precision of a scientist and an historian’s eye for pattern and detail with the passionate involvement of a wife, a daughter, a mother, and a lover. She also possesses an artist’s ability to draw back from the experience of the moment, having ‘learn[ed] to see/what needs to be seen.’ Reading these poems is like plunging into a cold stream: They leave you awake, alive, and shivering with recognition.”—Sue Ellen Thompson