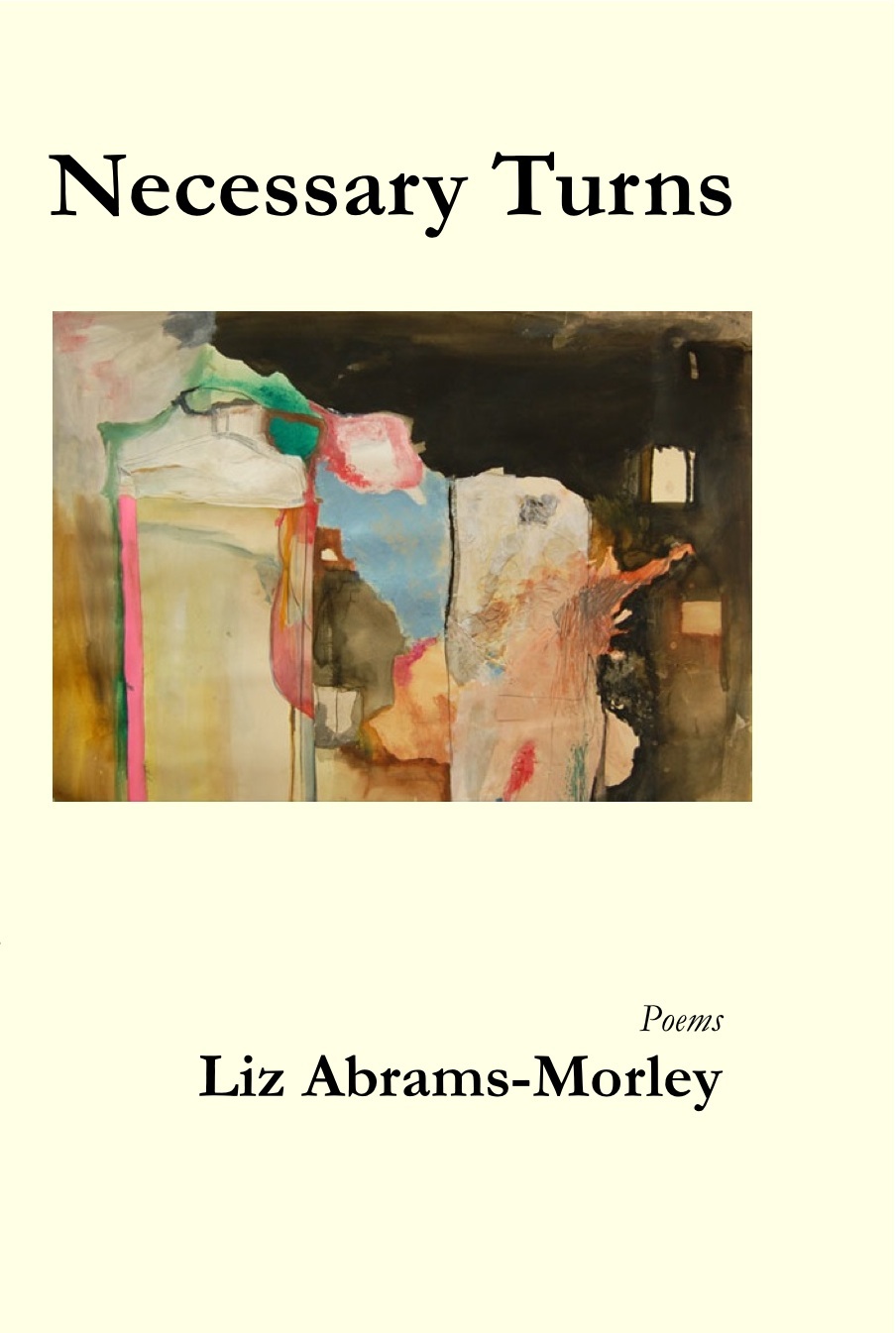 Liz Abrams-Morley’s Necessary Turns takes many linguistic turns, all of which are necessary and even essential, through perception and memory, striving for “the names of the lost.”

“Liz Abrams-Morley’s powerful book explores the uncertainty of life, and confronts the how and when of loss. Her poems challenge death’s finality through immersion in nature’s beauty. In the stunning poem, ‘Kaddish,’ she praises ‘the afterlife of fall, winter,/last summer: White fluted frills of fungus vast and lush/on a rotted stump that was once a tall oak reaching upward.’ Scattered through the book are poems in the magical voice of Rose, a whimsical sprite afraid of nothing--the very spirit of poetry. Rose and children in other poems show us what it’s like to live in the present moment. Never maudlin, this fully realized book shows us a way through the agony of loss all humans must experience—and, if we’re lucky, that journey will take us through the beauty of the natural world toward acceptance. But first, like this talented poet, we must see with new eyes beauty around us.”—Jill Breckenridge

“The truism that we are supposed to ‘write what we know’ has always seemed to me a more than slightly frightening injunction. And the sure, steady, deeply-felt, and accomplished poems of Liz Abrams-Morley remind us of why this is the case. Again and again in these poems, the fragility and transience of the domestic is revealed; the rituals of dailiness are always brave but ultimately futile attempts to cope with mortality, aging, and the manifold means with which this world will level us. They are the poems of a writer of a certain age, one who has come to something akin to wisdom, and who has done this—as the poems devoted to an alter-ego/persona named Rose so acutely attest—through a firm devotion to craft, through a knack for devising quotidian but riveting metaphors, and thanks to plenty of heart. They are poems where, as one effort puts it, ‘history [is] revealed only after/the trunk is severed from the root.’”—David Wojahn

“‘It could be no woman tries to talk herself into an ordered life,’ Liz Abrams-Morley tells us in Necessary Turns.  In vibrant, moving, expansive poems, she shows us nature confined: bugs in jars, topiary plants in lawns, people in families.  Yet like a bird, a woman wants ‘to flit and light above skeletal density.’  Abrams-Morley correlates inner and outer landscape, shows us how, in challenging order, we define ourselves.  In ‘In the Beginning,’ Eve names what Adam didn't, the imagined, the wondrous.  ‘How to Lose a Child’ is a prescription for survival after the unseasonable loss of a child.  In ‘Ways of Seeing,’ two women drive into a storm, defying nature, testing themselves.  This is a poetry of fervent image, of wisdom.”—Elaine Terranova

“Liz Abrams-Morley is fluent in Nature. It’s her first language, but she is multilingual. Her words stab, slice, dance, burn and burst off the page. They hit the brain, the heart and the gut all at once. You must carry this book and open it when you need music for your soul.”—Nancy Slonim Aronie

Liz Abrams-Morley is the author of Learning to Calculate the Half Life (Zinka Press, 2001) and What Winter Reveals (Plan B Press, 2005). Her poems and short stories have appeared in a variety of nationally distributed journals and anthologies. Both her poetry and fiction have also been featured on National Public Radio. A co-founder and co-director of Around the Block Writers' Collaborative (visit us on the web at www.writearoundtheblock.org), Liz is a faculty gypsy (aka adjunct professor of creative writing) and serves as an artist-in-the-schools in Pennsylvania. She and her husband recently joined the Empty Nester Great Migration from suburban Philadelphia. Now (when she is not on Cape Cod) she lives and writes downtown in the City of Brotherly Love. A lapsed family therapist with a family, she wades knee-deep in the flow of everyday life from which she draws inspiration, and occasional exasperation.