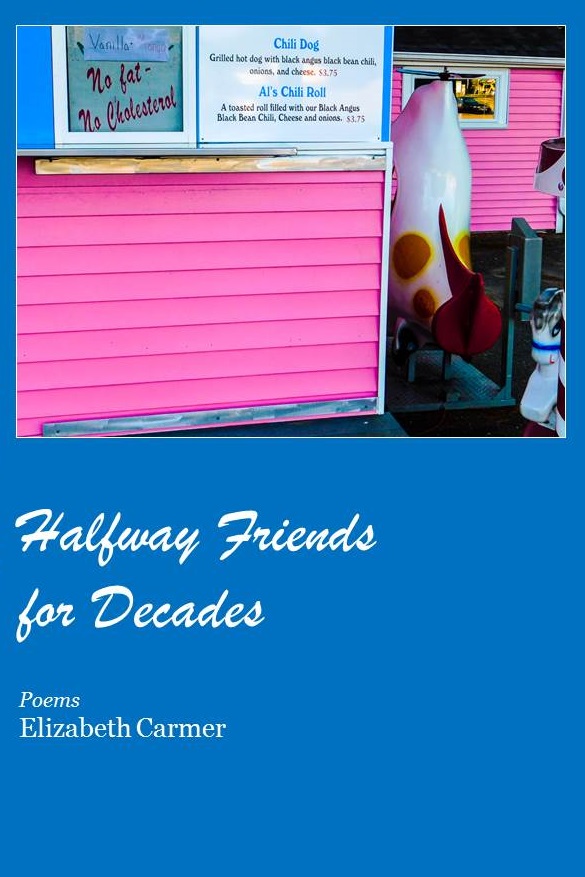 Halfway Friends for Decades by Elizabeth Carmer is the author's personal approach to reaching an audience. This poetry collection creates a narrative written for the reader by exploring her own recent and distant experiences. The poems are written with a philosophical approach in a traditional style. The book seeks to portray a contemporary reflection on society as a whole and the unique situation of being an individual within that realm.

"They Are Almost Invisible is a collection of poems written about childhood and the transition to adulthood, with a special focus on adolescence, that strange time lost in between. At times serious, at times comic, and always a bit pleasantly eccentric, this new collection from Elizabeth Carmer is endlessly surprising." - Nick Courtright, Atmosphere Press

"To describe Elizabeth Carmer's poetry I kept wanting to write poetry. Her poems don't attempt to solve mysteries, but reveal them. As I read and moved through her world, I felt an anticipation build. At times I found myself laughing from surprise and delight at the audacity of her word play, like watching someone use a musical instrument in some completely unconventional way. It's not just Elizabeth's style of writing that's so unique, it's the way she thinks. Her poems don't just beg to be read, but studied. And you'll find yourself reaching for pen and paper, to write, to decipher her fascinating code." - Mike Nelson, Portsmouth Poet Laureate

A native of Syracuse, New York, Elizabeth Carmer earned bachelor’s degrees in both Art History and Spanish from the University of Vermont, where she spent time abroad honing her language skills and researching for her future writing. After graduating, Carmer began a career in public health, working as an administrative assistant at a community health center in New Hampshire. Having volunteered internationally and locally for community and women’s health organizations, including a domestic violence office and Planned Parenthood, as well as a political campaign, Carmer uses her love of writing to harness in her poems a keen eye for culture, politics, place, and the world around her. Her poems are reflective and autobiographical in nature, and outward-facing in thematic scope.

Currently, Carmer spends her time out of work writing and engaging her passion for photography. Halfway Friends for Decades is her first work. Her website is elizabethcarmer.com.