Hello There, Poems by DeWitt Clinton 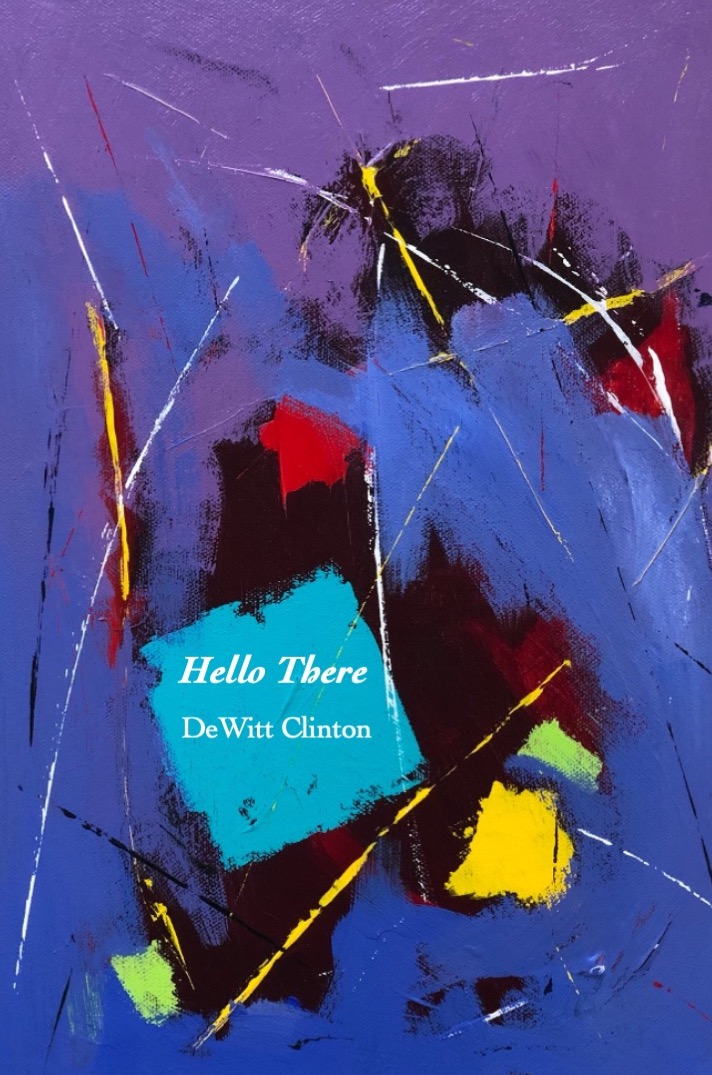 The poems in Hello There explore myriad ways of feeling loss, or losing someone precious, perhaps elderly friends, or fellow soldiers, or feeling losses through Chinese myth or an Irish rune. Something valuable, desired, is now lost in memory, and sometimes even that memory is lost. Some of the poems will appear confrontational, or perhaps read like a harangue, or rant, or blather, and some may appear impulsive, sardonic, or irreverent, but all are written in hopes of examining what has happened to all of us as we struggle to remain alive in the world's worst pandemic.

"Early on in DeWitt Clinton's Hello There, the poet asks what it means to survive and be present in the world. In the poem 'Goodbye in Case I Have to Go' the reader is greeted with: 'Of course, I have to / Go now, as I'm not even expected to know / What to expect, but something dreadful / Is going to happen and if it doesn't, I'll / Be forever grateful that I may have even / One more moment with you…'. DeWitt Clinton's poems are almost epistolary in their intimacies. If many of the poems are spawned by the pandemic, then, as you would expect, they are premised on a civility of hope. In the poem 'Our House' we hear: 'If there's time, when we're not in our house anymore, please read and see and enjoy and taste / everything in the house, before you throw it all out for the wolves and ravens who will have their / own say about what went on here, in this house, where we lived for two centuries, almost.' Many of the poems have the feel of a life lesson- 'Identify the event that is going unnoticed' in 'Study Guide: The Fall of Icarus'-like someone has learned some of what the living do each day in order to have the heart to continue the business of living in America. Rough business, these days, for sure."-Roy Bentley

"DeWitt Clinton's Hello There is an eloquent jumble of sorrow and delight. These are poems of leaving and longing and loss: loss of memory, of youth, of health and perspective. These are poems adrift in the growing 'fog that keeps all of us in silence.' But in the midst of DeWitt's stories of inevitably and futility, he paints a sense of light and hope, of humor and joy."-Cathryn Cofell

"DeWitt Clinton's powerful new poetry collection, Hello There, is part lament, part meditation, part gratitude. Conversational and intimate, Clinton matter-of-factly reminds readers, 'ready or not' 'something is out there and coming.' Contemplative and philosophical, the collection balances portent with empathy. Readers are invited to embrace what there is and the journey because '…the purpose?/ Really it's just to live.' Clinton lends matter to what really matters. In so doing, the collection becomes a communal experience as the author reminds us we are all on similar journeys of aging, memory loss, and ultimately the loss of each other, ourselves, and possibly the planet. We are not overwhelmed by the weight because we are not alone-the poet is 'still here…word by word.'"-Deirdre Fagan

"In Hello There, DeWitt Clinton welcomes us in as he attempts to come to grips with aging and the ephemeral, while also remaining grounded in quotidian observations of everything from geese overhead (and the risk of falling fecal matter) to 'whatever / Goes down nice and warm' ( On Hearing Another Poet Has Died). Clinton employs a variety of poetic styles, from stream of consciousness internal monologues to more imagistic pieces reminiscent of Robert Bly. He watches his wife's decline, anticipates the time after she has gone, and riffs on the political and sociological, skewering politicians and populace alike. Yet he maintains a sense of humor and an appreciation for humanity, whether writing of the horrors of war or of a rectal exam. This is a love song for those we've lost, though he isn't quite ready to be among them. He knows that death will come soon enough, so he advises 'for now let's not / Appreciate the art of losing things' (Losing Everything (Eventually)."-Betsy Mars