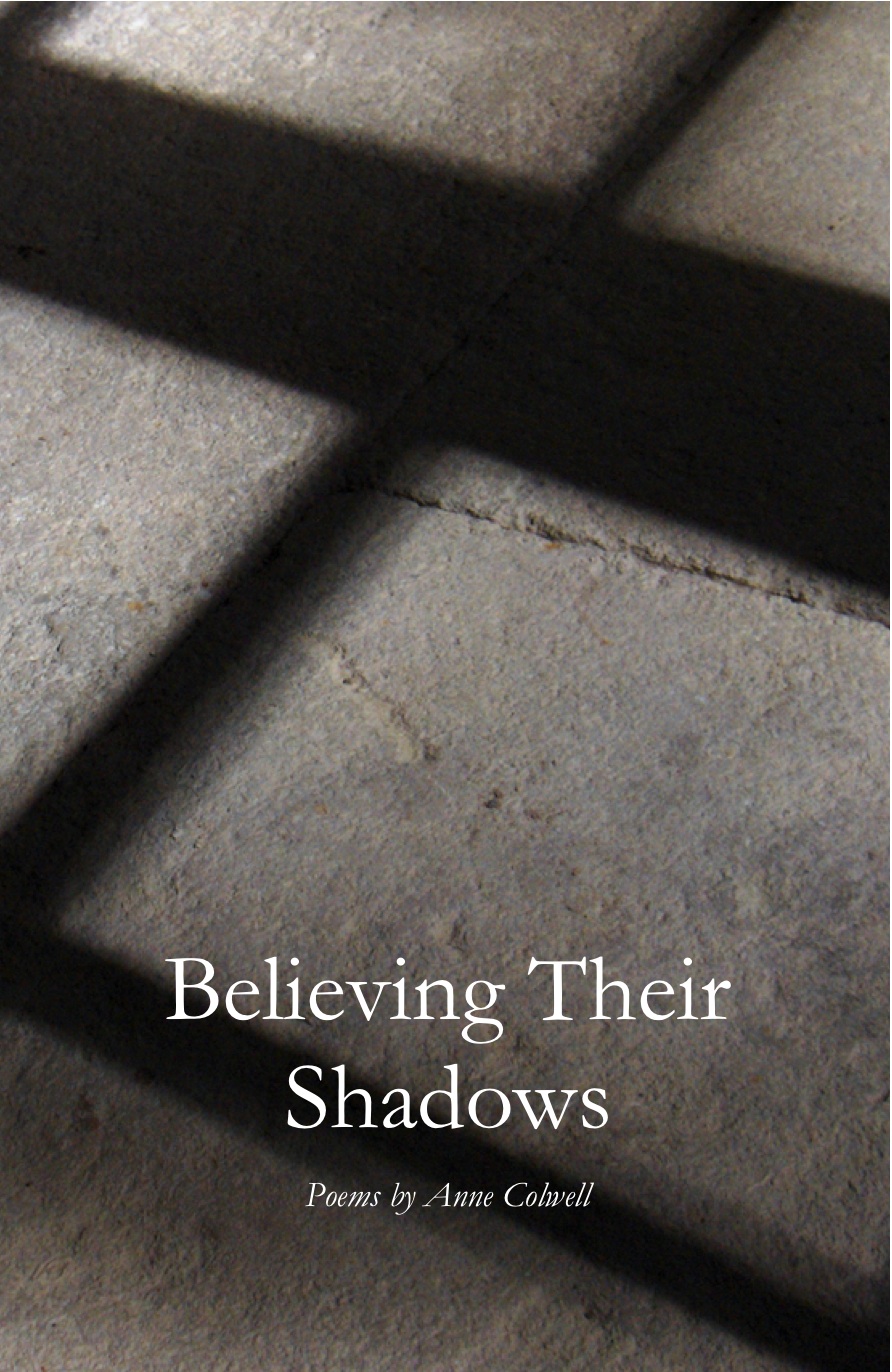 In Anne Colwell's Believing Their Shadows, the shadows are constant companions: they walk with us, behind us, in front of us, interweaving themselves into our lives, touching memory and touching experience itself.

“The poems in this volume achieve such luminous accuracy in their description of the familiar world that the reader becomes utterly absorbed. Then by tilting her subject slightly in poem after poem Anne Colwell reveals a stranger and more profound truth. When I read this book, the world cracked open. A word moved and the cosmos flooded in.  The possibility of such discovery is electrifying and it is rare, even in poetry.”—Jeanne Murray Walker

"I first read many of the poems of Believing Their Shadows some fifteen years ago, and I’ve remembered them that long, to the point of being able to still quote key lines—so I feel safe in saying that these are memorable poems, which speak softly but carry big sticks. ‘Haunting’ also seems fair, though ‘haunted’ is even more accurate; ghosts drift through these poems, ghosts of the dead, the lost, and those who may all too soon be lost—and of desires that refuse to die. The book opens with ‘Ferry Ride,’ and its effort to hold onto what cannot be saved marks the start of the book’s endeavors rather than the end. From the second poem, the revenant of the poet’s mother stalks poet and reader—almost literally by the second section’s first poem, ‘Ghosts,’ except for the moments when, as the poet finds, the ghosts are inexplicably absent. Nearly at the book’s center is ‘Cake,’ in which the mind’s ‘nibbl[ing] at the sweet edge / of future loss’ slides into the memory of stealing icing from birthday cakes before they are cut. But many of the poems are also profoundly erotic and celebratory, like the dream of riding a centaur down Main Street, like the casidas at the heart of the book, or ‘Mary Tells Her Side’—a poem rendered striking not only by its opening “like purple spikes of hyacinth” but by its brilliantly effective line breaks (annunciations change us in strange ways.) And the first of the book’s lovely casidas adjures the lover to ‘Look for me at noon./ I will turn the corner / of the cathedral / wearing its shadow / across my face, a veil / against the heat.’ In the end these poems seem just so: cathedrals rendered through their shadows, veils against heat too great to be otherwise borne.”—Catherine Carter

“These poems range back into a dark family history and forward into the brightness of travel and love. The cords that ring throughout are those of forgiveness and affection, the steps that move through it graceful and open. The poems embrace the humor of trying to explain Spanish history to an impatient little boy, the befuddlement of Anne Bradstreet’s grieving son, the anguish of failed communication with a dying father. They listen to other humans trying to make sense of hard lives, remember the sweet and dangerous moments with a hopelessly fragile mother, rejoice in travel and  music. Most of all, this is a book about being alive to and in your own life and always bearing the whole beautiful, fearsome, complicated business into the living light.”—Devon Miller-Duggan

Anne Colwell, a poet and fiction writer is an Associate Professor of English at the University of Delaware. Her work has appeared in several journals, including: California Quarterly, Mudlark, Evansville Review, Eclectic Literary Forum, Southern Poetry Review, Stickman Review, Poetry Bay, and Octavo. An online chapbook of her poems appears in The Alsop Review. Her critical book, Inscrutable Houses: Metaphors of the Body in the Poems of Elizabeth Bishop, was published by the University of Alabama Press in 1997. She received an Established Artist Award in Poetry and an Emerging Artist Award in Fiction from the Delaware State Arts Council. She lives in Milton, Delaware with her husband James Keegan and son, Thomas.