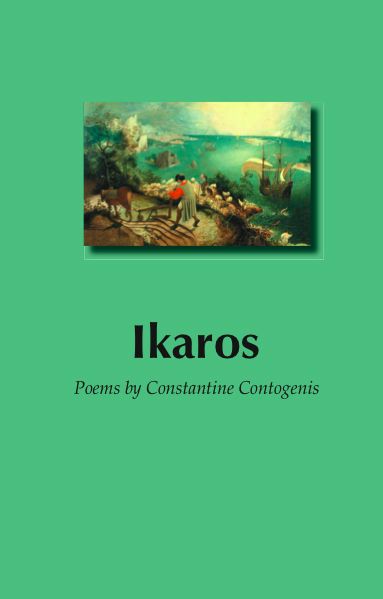 Allusive, elusive, the poems of Contantine Contogenis’s Ikaros are a journey through culture both high and low. He writes, “Even the Greeks paid for this view./The urge to climb and throw rocks,/to break through skulls to the thoughts/below, goes way back.” In these poems the world is fractured and reassembled, broken and rebuilt, to fit Contogenis’s wry and serious vision.

“For all the urban alienations and erotic estrangements which go far to persuade us of Contogenis’s currency as a card-carrying modernist (the cards he carries are indeed a marked deck, his poems edged in guilt and gaudy error), the startling ‘classical’ pieces of his title section go farther still to convince us that originality is a question—and an answer—of origins. The clutch of Cavafy-derived lyrics point the way out of the labyrinth of macho mummery, and these final poems are really a new beginning: for the poet, and for the reader’s notion of lyric wisdom. A touching book, and the touch is not soft, but Hellenistically hard."—Richard Howard

“Constantine Contogenis is a dialectical poet, recording the agon of body and spirit, sons and fathers, women and men, present and past, reality and myth, unreason and reason, content and form. He has also pushed traditional poetic subject matter and diction in a naturalist, colloquial direction, seasoning it with hardboiled comic irony—which perhaps helps to explain why his Icarus has emerged, dripping and featherless, from the sea where the myth drowned him, fully human, sociable, and loquacious.”—Alfred Corn