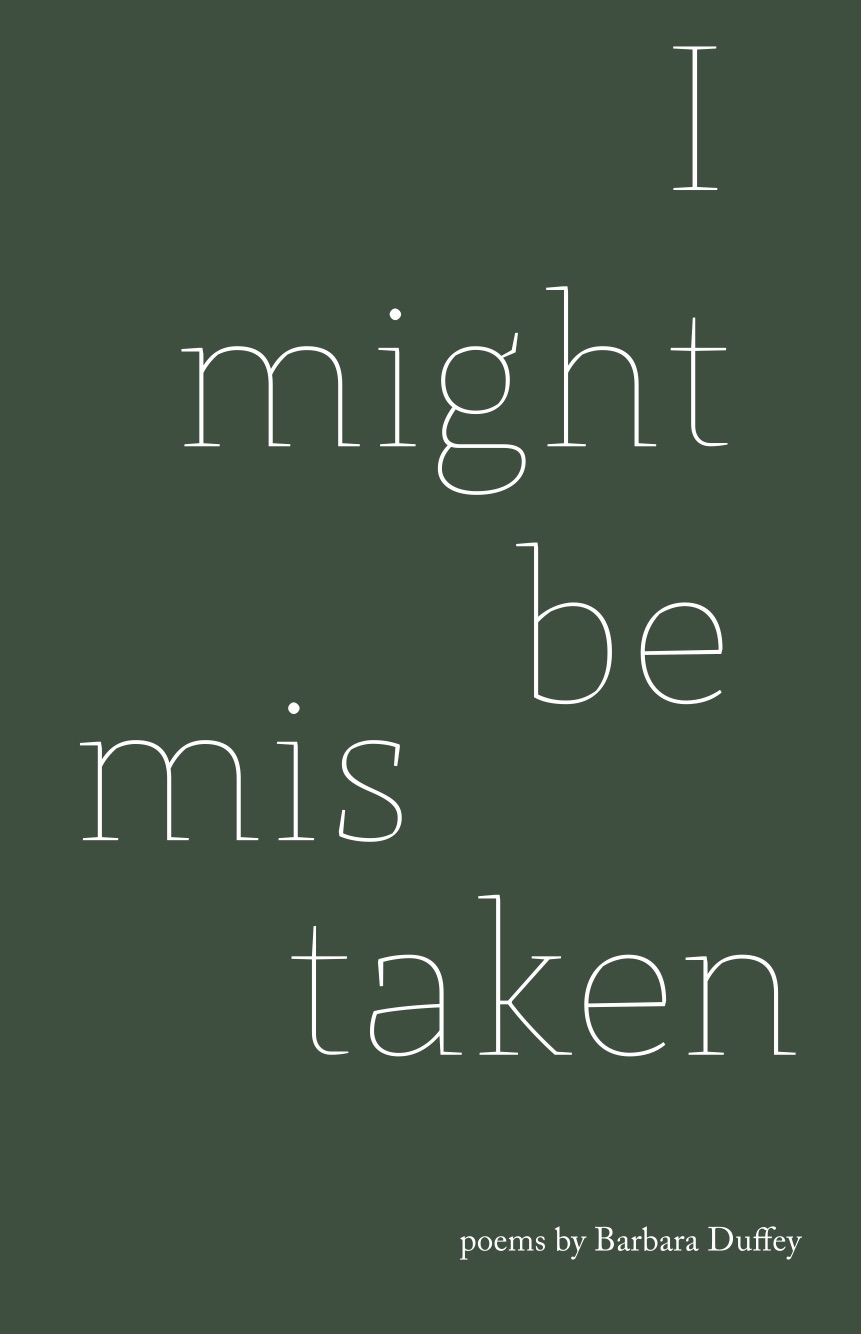 In her debut, Barbara Duffey challenges the love lyric's confidence, whether in its speaker, its object, or its methods. These poems turn instead to popular culture, history, and science -- from biology to nuclear physics -- for answers, often returning frustrated with relationships, mental illness, and the body, but with a renewed love of language and the natural world.

"I Might be Mistaken is just what a book of poems should be: unique, original, witty, charming, honest, affecting, profound. The humble, not-quite-sure-of-itself title is beautifully balanced by the supremely confident hand behind these wonderfully wide-ranging, intelligent, knowledgeable and wholly accurate poems, which hit bulls-eye after bulls-eye, perhaps precisely because of their humility, their awareness that their speaker 'might,' after all, 'be mistaken.' They wear their abundant and sometimes esoteric knowledge (who know 'gotham' came from 'goat hamlet,' that the testing of hydrogen bombs turned white sand into blue glass?) extraordinarily lightly and achieve great power by a daring arrangement of seemingly unlike or disconnected facts, emotions and personal truths into a perfect and extremely moving whole." -- Jacqueline Osherow

"By turns playful and probing, the crisp and calculating lines of Barbara Duffey's I Might Be Mistaken interrogate the architectures of the body, marriage, and the English language. Duffey is a poet of rich sonic textures and deft wordplay. As a result, the intellectual wattage of her poems is matched by their musical intricacy. Reading this book, one is continuously teleported across time and place -- from nuclear testing sites in World War II New Mexico to the pages of a 1950 Betty Crocker Cookbook, through the more obscure denotations of an Oxford English Dictionary, into the Mesopotamian afterlife and the Antarctic wilderness -- in a staggering diversity of innovative forms. These poems are as sly and funny as they are arresting, unnerving, and sharp."-Michael Dumanis

Barbara Duffey is a 2015 NEA Literature Fellow in poetry and the author of the chapbooks The Circus of Forgetting (dancing girl press, 2013) and The Verge of Thirst (South Dakota State Poetry Society, 2013). Her poems have appeared or are forthcoming in such publications as Blackbird, Prairie Schooner, Western Humanities Review, and Best New Poets 2009, and her prose in CutBank and The Collagist. She holds a PhD from the University of Utah, an MFA from the University of Houston, and a BA summa cum laude from the University of Southern California. She is an assistant professor of English at Dakota Wesleyan University and lives in Mitchell, SD, with her husband and son.