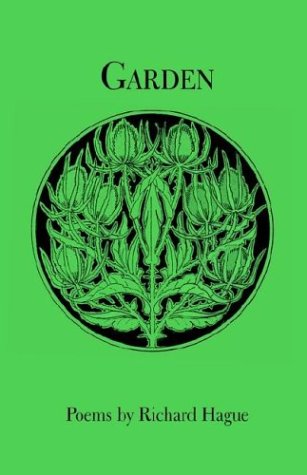 Garden, Richard Hague's fourth full-length collection, is his finest yet. Inspired by the fertile ground of his back yard, the poetry of Andrew Marvell, and his own imagination, Hague has written a remarkable series of meditations on nature and culture that resonate in his dense, musical lines. Like a garden itself, Hague's poems reward the reader's close, loving attention with many beautiful flowerings.

"In the thirty years I've known Richard Hague as a friend and poet, I've been constantly surprised at his wonder over the natural world and the depth to which his poems go to explore and celebrate it. Garden is a rich addition to this lifelong exploration, filled with toughness and affection, mystery, cycles of death and rebirth, and a search for one's place on earth. The poems are richly detailed and deeply felt, and live with a spirit beyond the mere stylistic considerations that today too often substitute for an authentic journey. Garden is a book of amazement at the largeness of the ordinary, at what is revealed in the turn of every spade of ground."--Joseph Enzweiler

"These are poems pulled up straight from the earth--like turnips--fragrant vegetal jewels with the clay still clinging to their skins. They are the poems of a man with a rich contemplative life, a detailed knowledge of natural science, and a mastery of precise language and verbal music. The insights here are never cheap. They are haunted by history, personal grief, the notion of impermanence, the words of poets past, and the elusiveness and necessity of meaning. One thinks of Thoreau, of Dylan Thomas, but Richard Hague is his own man, an original."--Mike Henson

Richard Hague's affairs with the soil began in his hometown of Steubenville, Ohio, continued for three decades in Cincinnati, and most recently have spread to the Appalachian landscape of southeastern Ohio's Monroe County, where he is creating a garden at the edge of sixteen acres of woods in Wayne National Forest. His Cincinnati home is surrounded by over 200 species of plants; for more than a decade he managed his neighborhood's Madisonville Community Garden, organized under the auspices of the Civic Garden Center. He teaches writing, literature, and the interdisciplinary Course of the River at Cincinnati's famous Purcell Marian High School. A graduate of Xavier University, he has studied at Oxford, has been a Scholar in Creative Nonfiction at Bread Loaf, and has received two Individual Artist Fellowships in Poetry from the Ohio Arts Council. He has twice been nominated for a Pushcart Prize. His eight books include the poetry collections Ripening (Ohio State University Press), Possible Debris (Cleveland State University Poetry Center), and A Bestiary (Pudding House Publications). Milltown Natural: Essays and Stories from a Life (Bottom Dog Press) was nominated for a National Book Award.