Born Under the Influence, Poems by Andrena Zawinski 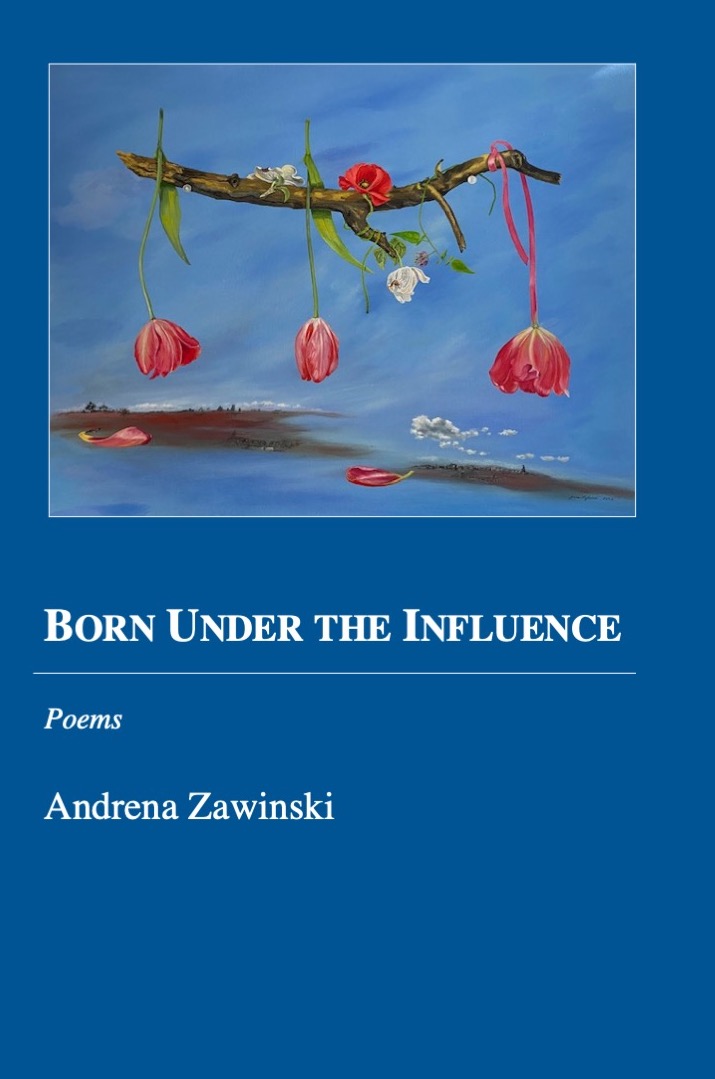 Born Under the Influence, through the beauty in its poignant and passionate poems, carries the reader on the journey poetry should.

"Andrena Zawinski's powerful fourth collection is dynamic in the way musicians use that word, artful in its mood shifts-loud in anger at what women are given to endure and quiet in appreciation of the pleasures they can find. With great skill and feeling, she depicts women's lives across a variety of times and places. Everywhere, Zawinski pays attention, whether to the miners' wives in a company coal town who were used by bosses '… in fields,/across floorboards, mouths silenced with gags/of grief…' or to a vase with three lilies in a seaside room: '…their musky heads/tilted the way women stop to talk on coastal trails/ears of the cove listening in.' Born Under the Influence speaks up beautifully for women and also for life." - Susan Cohen

"Andrena Zawinski is an activist poet whose works intensely open up paths of struggle, celebration, and revolutionary victories. Her work will convince any reader of her importance as a major American poet. In these poems, she names all the things of youth and then arrives at womanhood and attacks all forms of contemporary femicide amid lyrical affirmations of love attained in a brilliant book of poems." -Jack Hirschman

"Andrena Zawinski is a poet of rare talent and radical empathy who combines the straightforward, take-no-prisoners, blue collar directness of a steelworker's daughter in her narratives along with the rules of formal verse creating lines which blossom into poems of memory, rebellion, longing, righteous anger, and-above all-survival. These poems are tough, smart, and beautifully crafted." -Mary Mackey

"Andrena Zawinski records details of memory and songs of longing. She describes growing up as a Catholic girl in a working-class neighborhood as a cascade of childhood toys and games, a flood of adolescent loves, a parade of bad boys and charmers. Innocence dissolves into sexual awakening merging with grief and loss. Once we know who the poet is, she's free to paint landscapes, cityscapes, portraits of women-the murdered ones, the forgotten ones, the ones who died alone. The poet celebrates working men and women: waitresses, immigrants, farm workers, ironworkers. A versatile master of fixed forms, Zawinski employs pantoum, rondel, haibun, landay, and others to counterpoint descriptions of the horror of rape, the agony of rage, and the triumph, however tentative, of recovery. These are poems of wide range, expert craft, and deep feeling. We are lucky to have this poet among us." -Michael Simms

Andrena Zawinski is the author of three other poetry books, several chapbooks, and has edited two anthologies. Her poetry has received accolades for free verse, form, lyricism, spirituality, social concern and include a PEN Oakland Josephine Miles Award, Kenneth Patchen Poetry Prize, Emily Stauffer Poetry Prize, Tiferet Carriage House Poetry Prize, Pittsburgh Magazine Harry Schwalb inaugural Excellence in the Arts Award, Akron Art Museum Prize, Paterson Literary Review Allen Ginsberg Honors, and many more with several Pushcart Prize nominations. Her poems have received praise from Lynn Emanuel, Jim Daniels, Len Roberts, Carolyn Wright, Lynne Knight, Jan Beatty, Rebecca Foust, and others for their embrace of the human condition with compassion and intelligence with an unflinching attention to craft. Born and raised in Pittsburgh, PA as the daughter and granddaughter of steelworkers and coalminers, she earned degrees from the University of Pittsburgh and went on to become a teacher of writing in public school, university, and community college systems as well as a poet-in-residence for educational, arts, and community organizations in Pennsylvania and California. Those included Pittsburgh Public Schools, West Mifflin Schools, Gilmary Therapeutic Treatment Center for Adjudicated Delinquents, Allegheny Community College, University of Pittsburgh, St. Marys College of California, Peralta Community Colleges, Pittsburgh Council for the Arts, Western Pennsylvania Writing Project, International Poetry Forum, and others. She has also done government, legal, retail, and restaurant work, much of it as a single parent. Zawinski lives in the San Francisco Bay area where as an activist poet and feminist she founded and runs a popular Womens Poetry Salon. She was also longstanding Features Editor at PoetryMagazine.com.

Cover art customized for Andrena Zawinskis Born Under the Influence is Jane Catherine Hylands Last Spring, 32x26 oil on masonite. It is a recipient of a 2022 American Arts Award in which some 2,000 artists from 69 countries competed with 300 of the best contemporary artists in the world selected. Hyland, a trompe loeil and botanical artist, was born and raised n Melbourne, Australia but is based in Pittsburgh, PA where she worked as an artist for the Carnegie Museum of Natural History.